Taro is grown in mainly tropical to sub tropical climates. they don't tolerate cold temperatures, so their range is limited to the warmer parts of the world. Also known as "Elephant Ears" they are sometimes grown as an ornamental plant. But those varieties are not edible, so please don't go and dig one up from your garden!

If you like spinnach, then you are going to love Taro leaves. It has a similar flavor, and like spinnach, is high in essential vitamins and minerals. It also has good protein levels. Unlike spinnach however, Taro leaves are toxic when raw. They contain calcium oxelate (as do many other green leafy plants, such as chives, parsley, and rhubarb). This can be neutralized by either soaking in water overnight or by cooking, so don't let this put you off using them in your recipes.

While Taro (the local Fijian name for this is Dalo) is grown across most of the Pacific islands, Fiji is probably one of the bigger exporters of both the root and leaves. The island of Taveuni -AKA:"The Garden Island", provides much of this, as is is free of the Taro Beetle which damages the leaves. 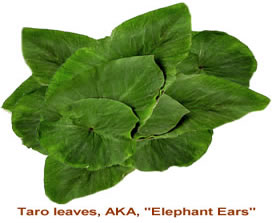 Native to Asia, Taro is now widely grown and used in the Pacific region.

Boiling Taro leaves can remove much of the goodness from them, so if you have a pressure cooker, use that instead. A typical way to use them, is to wrap your ingredients in the leaves before cooking. See our Palusami recipe as an example of that.

Do you ever bake a whole fish in aluminium foil? Then try wrapping the fish in Taro leaves (still use the foil). Delicious! Almost any food that you cook this way can be wrapped in Taro leaves. Not only will it taste great, it will be good for you too. Taro leaves are high in vitamins A and C, have good levels of calcium and protein, and they are high in iron.