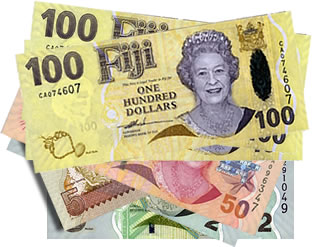 The currency in use in Fiji (currency code FJD), is the Fijian dollar. Bill denominations are, $100, $50, $20, $10, $5. Coins are 5c, 10c, 20c, 50c, $1 and $2. The bills have the portrait of Queen Elizabeth II, although it has been announced that this will be replaced with images of local flora and fauna. I read about that announcement back in March 2011, though I haven't yet seen any of the new bills in circulation.

Background information on the Fijian currency

The modern Fijian dollar has been around since 1969. There used to be a 50c and $1 note, as well as 1 and 2c coins, but these are not in circulation now.  The $1 bill was replaced by a coin in 1989. The Fiji bills reduce in size depending on their denomination (unlike American greenbacks which are all uniform). I believe that this was only introduced quite recently: older bills were all the same size.

How far will your Fijian money stretch?

In April 2009, the Fiji government devalued the dollar by 20%, citing the world wide recession as the major contributing factor. This is not the first major devaluation to occur in recent times. In 1987 it was devalued by around 33%, and then again in 1998 by 12.5%. What this means for people planning a vacation in Fiji, is that you dollar goes a LOT further than it used to. Instead of being almost equal to the US dollar, the value is very close to 50c in the US$. This has to make Fiji one of the best value tropical vacations for people coming from the US, Australia and New Zealand (Fijis three biggest tourism markets).

Curency devaluations are always going to help some, and hurt others. Importers will suffer (and therefore consumers). Exporters will benefit. Fiji relies heavily on the tourism trade, and the recent devaluation seems aimed at attracting more tourists. If your dollar goes further, then you are more likely to choose Fiji as your vacation destination, right?

Personally, I'm not sure that this has happened, I don't see any spike in tourist numbers since that devaluation. Just a continuing upward trend that apears to be consistent with numbers prior to 2009. You can check for yourself, on the tourism figures page.

We give prices in Fijian dollars on this website, unless otherwise stated.

Some Fiji travel websites quote prices in Fijian dollars. Some use US, and other might use NZ or AUS currencies. We believe that can be misleading - so we use FJD$ on all prices, unless specified otherwise.