While eggplant is not native to Fiji, it is widely used in Fijian cooking (although technically it is classed as a berry). It does in fact originate from India, and as close to half the population of of Fiji is of Indian descent, the eggplant has become a staple ingredient of many dishes.

Loads of fiber, vitamins and minerals, as well as anti oxidants, make this a very healthy addition to your diet. The rubbery texture of cooked eggplant takes a bit of getting used to. The first ones that I tried almost put me off eating them again... chewy, rubbery and very little taste.

Back then, I didn't realize that eggplant absorbs the tastes of other ingredients. The flesh will soak up the flavors and oils used in cooking. So now, I don't think of it as an ingredient with it's own taste, more as a vehicle to carry other flavors.

Why Cook With Eggplant?

This really is an undervalued food. It's nutritious, easy to cook, adaptable, and easily grown yourself (if you live in a warmer climate). The picture below shows eggplants (also known as Aubergines) for sale in the Suva markets. At five for fj$1, you won't find a cheaper main ingredient for a meal. In cooler climates (such as NZ, South Aust, and parts of USA) Eggplants are more difficult to grow, and you will pay a lot more. Perhaps $2 -$5 each. 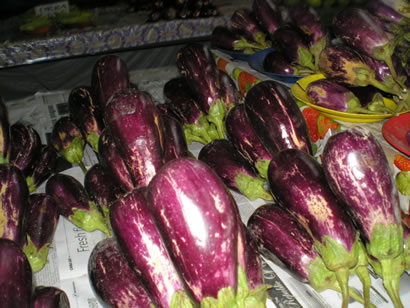 Eggplants for sale in the Suva Municipal market, 5 for fj$1

Most Fijian eggplant recipes that I have tried, have been variations of a similar theme. First, grill or bake the eggplant. Once cooked, cut up the flesh and add a sauce or dressing. Simple, huh? Here is a popular Fijian dish that uses a dressing called "Miti"...which is a hot spicey sauce, often used with fish but also very good with eggplant.

Chop tomatoes, onion and chillies in to small pieces. Mix the ingredients together. Use as much or as little of the chillies as you want. If you prefer, you could substitute this for a small pinch of cayenne pepper.

One eggplant per person. Cut these into half (lengthways) and remove the seeds (they are too bitter to eat). Grill these in a preheated oven at a higher temperature (around 400°F) until they are tender and the skin has started to shrivel. That should take 30 minutes, maybe a little less, depending on the size of your eggplants.

Once done, remove from the oven and leave to cool down a little. Then remove the flesh from the skins and cut into strips. Pour over the Miti dressing, and it's ready to eat.

This can be done as a main course served with your favorite salad.

This recipe brought to you by www.Fiji-Budget-Vacations.com